The dogs lay at your feet, Edie

3. "Femme Fatale" - the Velvet Underground
"You're put down in her book
You're number 37, have a look
She's going to smile to make you frown, what a clown
Little boy, she's from the street
Before you start, you're already beat
She's gonna play you for a fool, yes it's true
'Cause everybody knows
She's a femme fatale"
Upplagd av Baby Strange kl. 11:09 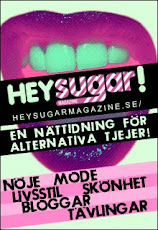 Looking for something strange?